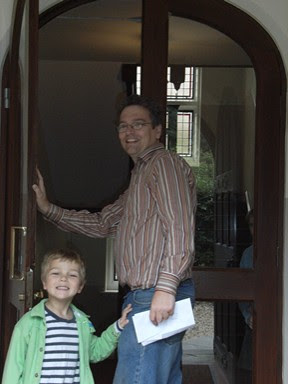 have a staircase, a room and my name on the wall. (A day before I thought we'd be able to get in.) So it must be official.
I also have a very full calendar, all of a sudden. I'm relieved that from random conversations, there are plenty of people who haven't really got started on their New Testament Greek, so I even feel a teeny bit smug.
Moving in felt a bit strange. Not quite winding back the clock 20 years, but some elements of that. All those bookshelves look so empty, in spite of a couple of boxes of books. They'll fill up soon enough.
I met about a third of my staircase. Everyone seems reassuringly normal. (Why does a bit of me still expect Christians in general and ordinands in particular to be, er, a bit odd?)
Perhaps I should populate a wish list, in case any wellwishers feel like subbing my library. I'll toy with that idea a little (which is competing in my head with an address to send Caffè Nero vouchers).
Posted by Unknown at 6:41 pm No comments: 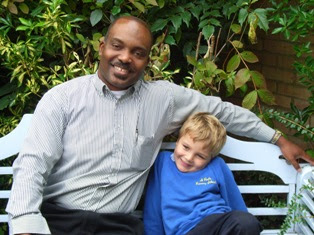 We had a pleasant surprise when our very dear friend Howard dropped by: here he is with his godson.

The question of which church I'll be attached to is still uppermost in my mind, so this and Howard, a former colleague and friend from a previous church, set me thinking about the trail of churches I've spent at least a few months attending came to mind.

Here they are, starting with the most recent and working back to when I became a Christian. (Ruth - please correct me if I've made any major blunders!) 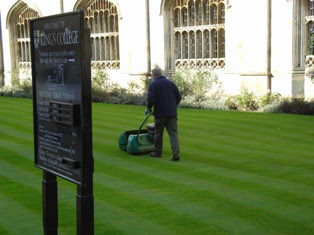 Cambridge must now be at its very quietest: definitely the calm before the storm.

There's lots of painting going on everywhere you look. New pubs, bars and restaurants sprout on every street, full of hope that they will prove to be this year's 'in' place. 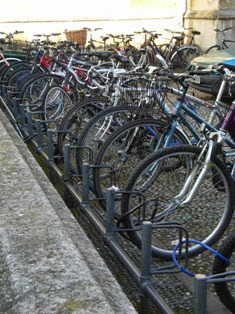 Even King's Parade is peaceful. That grass looked pretty good yesterday; it will look pretty good tomorrow and more or less all the time except when it's recovering from the BBC Outside Broadcast Unit.
It's pretty much the same cluster of bicycles, just a single tidy row, no need to scramble and search through a heap. The shops are full and neat, hoping for an influx of unaccountably guilty-feeling parents, wanting to cheer their progeny (or themselves) up with an impulse purchase. 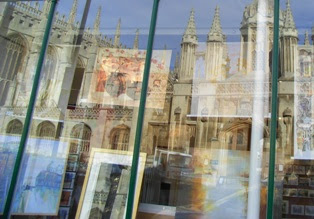 And here it's the same. Life is changing in so many ways, starting any day now. I'll get the key to my shared study on Sunday, and then it starts. Two years that will, I suspect, feel like two weeks.
We all know in theory what the change means, but there's the theory and there's the fact. How will the children adapt to the change of routine? How much will I miss the school run (school cycle, that is)? How will we carve out time to be a couple in this new, exciting, alarming phase of our lives? Where will we be this time two years hence?

"Margaret, are you grieving over Goldengrove unleaving? Leaves, like the things
of man, you with your fresh thoughts care for, can you? Ah! As the heart grows
older it will come to such sights colder by and by, nor spare a sigh though
worlds of wanwood leafmeal lie. Yet you will weep, and know why.
Now, no matter, child, the name: sorrow's springs are the same. Nor mouth
had, no, nor mind, expressed what heart heard of, ghost guessed: it is the
blight man was born for: it is Margaret you mourn for." GMH

There's a little mourning to do for what's past; there's an 'unleaving' we have chosen. But we believe that we are following one who will not fail us. If sorrow's springs are the same, the springs of hope and joy lead also to one single source. It is in order to climb in pursuit of that source that we have set out, both to be refreshed ourselves and to bring its crystal water to others.
Posted by Unknown at 2:43 pm No comments: 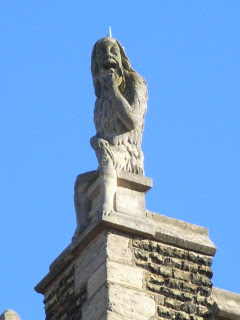 ...dawned bright and glorious. Enough chill in the air to invigorate, not enough to make one's throat dry while cycling.

So cycle I did. And here are some highlights of my journey to fetch the paper (and today's free book, from the Horrible Science series). 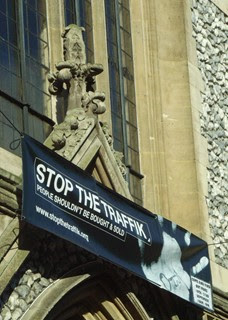 St Andrew's Street Baptist Church has an exhibition from Stop The Traffik, which is trying to rally public opinion and action against the continuing scandal of people trafficking.

This is an important year, marking the bicentenary of the passing of the Act of Parliament that outlawed slavery and slave trafficking throughout the British Empire, and effectively throughout a large part of the world as British sea power was such that it acted as something of a global policing service.

There are issues for us Brits as we contemplate the age of empire, but this is one area where we can be unreservedly proud of our contribution in the past.

That should also inspire us to get out and do something - just signing the online petition is a start - to bring that great work to a conclusion. 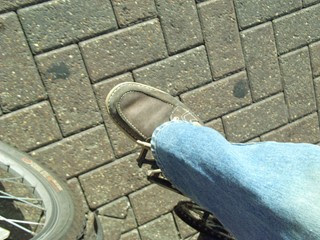 Here's proof that I was being responsible, carbon-wise, in my perambulations. 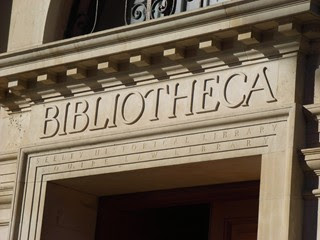 I'm not a great fan of this little corner of Cambridge. After the wild exuberance of King's College, it's a bit derivative and lame. But I like the lettering on this doorway. 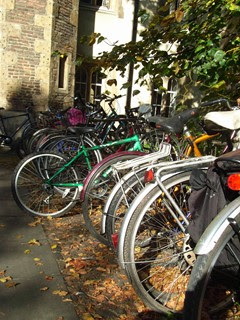 You're never too far from a stack of bicycles here. Unfortunately, a favourite pastime of some late night wanderers is mild or major vandalism of bikes. I only noticed today that someone has kindly removed the handle of the basket on the front of my bike. 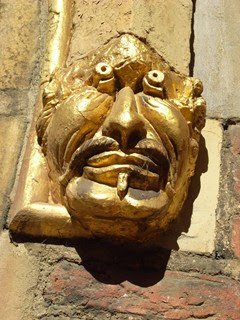 After my comments about looking up, here's another delight!

It's the gold leaf that makes this one particularly thrilling, in my opinion at least. 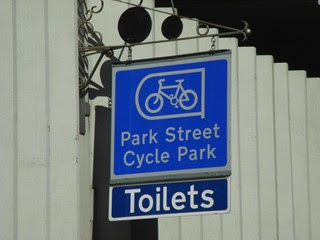 Now here's the answer to the puzzle picture. I'd have accepted, "it's a car park!"

I've never yet had occasion to use the Park Street Cycle Park, but I'm glad it's there. (Maybe I should use it more often. Fewer petty vandalisms.) 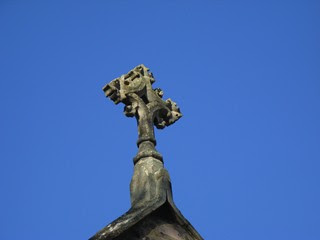 Back, now, to looking up. I'm very fond of Cambridge's many and varied crosses. They're particularly stunning on such a clear day. Carved stone against an azure sky is a wonderful thing. 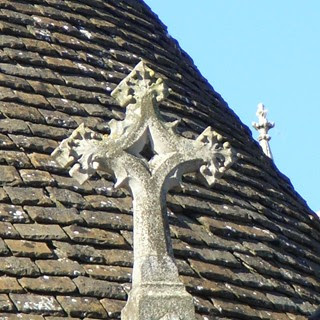 ...and here's another. (Admittedly this isn't against the sky, but the composition might tell you which well-known church building we're at.)

So there you are. It's great being forced out in the morning!

(And a bit later too: Ruth and I took the opportunity of a stop in Costa Coffee en route to Sainsbury's, to shop for this evening's meal.

There you are. Bang up to date. Must go: stock's a-bubbling.

Posted by Unknown at 1:46 pm No comments: 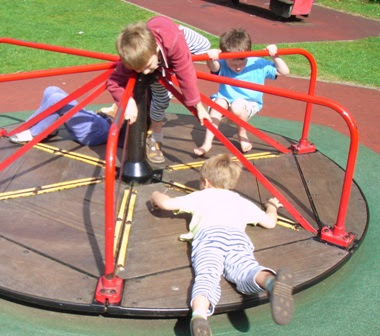 I would be happier to own a label that felt more like 'red haired' than 'Man Utd' - a distinction with a difference, yet no flag for battle.
Posted by Unknown at 9:37 pm 3 comments: 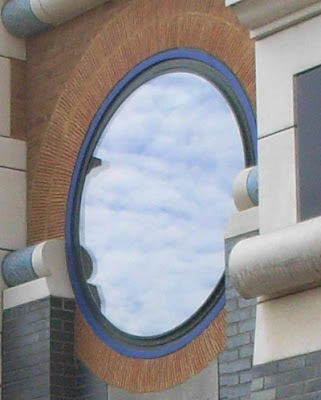 Well, here I am at the start of my last week before starting my course. A good time to reflect on where I've been and where I'm headed.

I am especially looking forward to:

There are inevitable moments of, if not panic then mild alarm. This is a big change. I've occasionally - more than occasionally, let's be brutally honest - griped about the demands of corporate life and of consulting. But I enjoyed it a lot too; I still can't resist daydreaming business strategy and critiquing the marketing I see.

What I'm going into is both more predictable and more unknown. The general shape of my next 25+ years is now possible to sketch out in a way that would have been laughable in a regular job. But there's a fractal quality to the picture as I try and zoom in to the actual months, weeks, days and hours.

Hence the occasional rushing feeling. I'm heading uphill and will be going over the top to jump off; by the time I'm there I hope and expect that I'll have, and know how to use, a hanglider!

Posted by Unknown at 9:13 pm No comments: