It's all Greek to me

Quite a day. Not exactly typical, but thoroughly enjoyable. 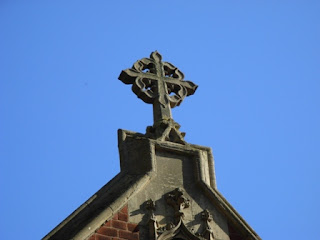 First to chapel for morning prayer, after which I forgot to sign up for lunch - again :(

Fortunately I'd brought in some tiffin I made last night, so all was not lost. (And OK, I went home for lunch. But that's later)

Morning prayer mainly follows Common Worship: if you want to see today's service in full including the psalm for the day, readings appointed in the lectionary see this link. Sometimes these services feature music and sometimes not, although there's music in the poetry of the Psalms and the Canticles.

We've been following through a passion narrative: this reminded me of my first attempt in a long time to rediscover my joy in creative writing in 2003, which is gradually becoming part of my life again. It's exciting to me that quite a few people here at Ridley have a real interest in reuniting faith and the arts.

Next off for the first lecture in Church History, which was very enjoyable, making some helpful connections between events in the Roman Empire and in the first days of the Church. 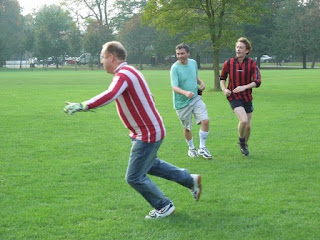 In the afternoon we had a staircase football challenge.

I'll admit to mixed feelings about football. I love to play though, as with singing, I bring rather more gusto than skill.

Unlike singing, said gusto then fades rather rapidly, to be relaced with resigned yet dogged determination to survive.

We at 'H' made achieved a glorious first round exit. (Then a draw.)

Then I had agreed to referee a later match, and somehow found myself playing instead. This old body didn't take so kindly to 20 more minutes of football... Great fun, though.

To quote the original DNA001 (clue! clue!) I felt like a military academy - bits of me kept passing out.

Then home, before we headed off again to see that once every three years Cambridge treat the Greek play - Medea performed in Greek with surtitles.

I thoroughly enjoyed it, especially as our seats were on stage so we had the action 'up close and personal.'

My New Testament Greek is at a pretty early stage, so I was delighted to find that I was picking up words and phrases and felt my ear was tuned in. Anna came too and enjoyed the experience, though a fun-filled-feelgood-family-feast it isn't.

Continuing the Greek theme, we stopped by at the very nice Greek takeaway for falafel and chips. Then chatted over a glass of wine with our very kind neighbour who babysat. And so to bed.

If you can spring from bed when every neighbour
Thinks Morning Prayer's a crazy thing to do,
If liturgy's a herculean labour,
Yet still you treat the Canticle as new,
If you can don and doff surplice or cassock
Or do without liturgical disguise,
And sit on chair, then stand, then kneel on hassock
With look most beatific in your eyes:
If you can bellow hymn then in your best sot-
-to voce breathe prayer only God may hear;
Raise hands at Ridley, thurible at Westcott,
With tact and grace and always most sincere;
If you can bear to hear both pop and chanting
And follow either path to praise your Lord,
Or hear the preacher wiffling or ranting
And never once betray that you are bored:
If you can mine the gold that's in the scriptures
And never merely bend them to your will,
And turn your hard work into felt-tip pictures
For nine year olds who never can sit still;
If you can study dusty books by Germans
When others to the pub have long adjourned,
And, knowing none of it will help your sermons,
Yet be resolved to keep what you have learned;
If you can talk to drunkards, dons and dustmen,
To students who weren't born when you left school,
And turn to each a patient ear and just, when
You'll come across as one more Holy Fool,
If two hard years of work leave you believing
The word of life's good news for Everyman,
You'll have deserved the honour you're receiving,
And -- which is more -- you'll be an Anglican.

Posted by Unknown at 9:56 pm No comments: