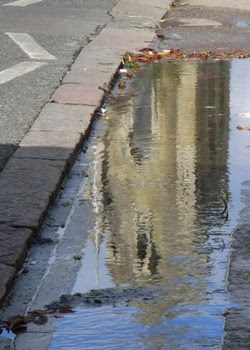 OK, Cambridge doesn't have a noughth week as Oxford does, but I can't think of a better way to describe it.

So many faces, so many impressions, so many hints and happenings...

Let me offer you just a sketch of life and events here.

One important focus of Ridley life is the staircase. We live in, study in or are otherwise attached to one - in my case, it's the second of those options, sharing a study with Toby, another married ordinand.

So this morning, for instance, we had morning prayer on the staircase. Christina led, and as this is the day for alternative approaches she chose an Iona-influenced style, simple and reflective.

I wonder whether I'll find more time and space to write while I'm here... In any case, the following brief verse came to me while we were choosing and reflecting on a single word in prayer.

In hope and expectation we arrive.
Our hearts cry out to you our deepest need:
Pour out your love that we may grow and thrive.
In stillness hear the softest voice: "now, feed."

In joyful expectation we are sent
Into the field where you have scattered seed
And some grows strong; and some is bruised and bent.
In stillness hear the softest voice: "now, feed."

Some time I'll put something about our first foundation lecture, which also included a time of commissioning. It's quite personal, so you'll have to wait until I've digested more thoroughly.

From today's, though, I heard something from Jeremy (another one - there are several of us here!) that struck me as the starting-point for ministry. I won't have his words exactly right, but anyway, in the context of what it is to receive the grace of God shown in Jesus Christ, he said something like this,

"Sometimes people talk about grace and faith as if it boiled down to presents
we receive or will receive from God. Well, we get bored of gifts.
But we never get bored of someone who loves us." 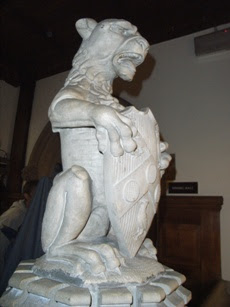 So, back to the much more mundane, but still important, topic of food. Like most prizes of great worth, this treasure is guarded most fiercely as you can see here.

Everything hinges on getting used to signing up in advance for meals. There is a superficially simple system involving index cards, plastic boxes and paper clips: these can be dealt with on previous days, or at latest by breakfast time. (I have got the hang of breakfast, by the way :) )

Like chess, there are a few basic moves to the game, but the appearance of simplicity is exceptionally misleading. Novices like myself fall prey very easily to the subtleties.

There is grace in the system, though: the end of the queue, behind those successful signer-uppers, is a place of optimism that is generally justified.

Suffice it to say that I now regard the advanced players with great esteem. 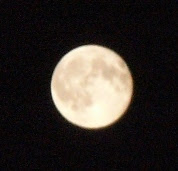 that was maybe not a very structured reflection. But then, it is noughth week (to me, at least) and so life feels a little chaotic. By a couple of weeks hence, the regular timetable will have well and truly kicked in, and everything will be relatively neat and tidy I'm sure.

Meanwhile, I'm enjoying my time more than I can say. I am so grateful for this opportunity to be trained for full time ordained ministry, and delighted to find myself in the company of such an interesting and varied group of people.

The next few days will be quite busy, as there are events and functions to do with college. I'm rather looking forward to matriculation - my first chance to wear that MA gown, which I'm amazed but delighted to find has survived the ravages of time.

As a slightly older student, it's rather reassuring to see that the rhythm of University life is drawn by the same force. The tides ebb and flow, regular and predictable in an overall sense, yet close-up there is never the same pattern left on the sands by stones that are washed up and exposed, then washed out and disappear from view.